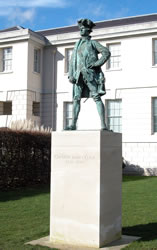 Memorial to the great maritime explorer Captain James Cook (1728-1779) by Anthony Stone (b 1934) and presented to the National Maritime Museum in 1994 by NMM trustee Sir Arthur Weller. This bronze copy of a clay then resin statue was created as one of a series on seafarers and explorers for the New Zealand pavilion at the1991-92 Expo.

Captain Cook was a great sailor and explorer, surveying the St Lawrence in 1759, completing a circumnavigation of the globe between 1768 and 1771, including charting the coasts of New Zealand and eastern Australia. From then until his death in 1799, his voyages included the Pacific Islands, the Pacific coast of North America and even skirting the Antarctic ice fields.

Cook recognised the importance of hygiene and diet, managing to avoid the ravages of fever and scurvy among his crew. He also took with him on the 1768-71 voyage the eminent plant collector Sir Joseph Banks. 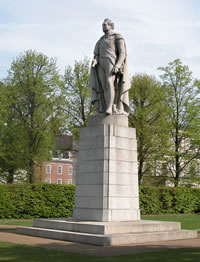 Granite figure sculpted in the 1840s by Samuel Nixon originally for King William Street, City of London, to commemorate William IV, the Sailor King (1765-1837). It was moved to its present site in the King William Garden, Greenwich Park, in 1936. The garden is on the site of St Mary’s, a chapel of ease (subsidiary) to St Alfege’s Church, Greenwich, by Sir John Soane’s pupil, George Basevi. The chapel was demolished in 1936.

William IV was the third son of George III and Queen Charlotte. As the Duke of Clarence he served at sea, rising from able seaman to Lord High Admiral, before succeeding to the throne in 1830 on the death of his elder brother, George IV. He was responsible, when Duke of Clarence, for remodelling the Greenwich Royal Hospital Schools, now part of the buildings of the National Maritime Museum. 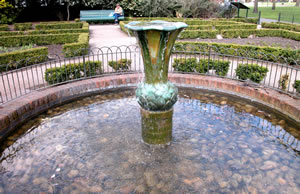 The central feature of the Park’s Herb Garden, the fountain, was installed in 2000 and officially opened by Rt Hon Nick Raynsford MP. It was sculpted by local artist Kate Malone for the Friends of Greenwich Park with support from Thames Water.

Set in a sheltered area near St Mary’s Gate Lodge information centre and café, the Herb Garden is laid out on traditional lines with box-edged beds. Originally established in 1969, the Herb Garden was re-designed and re-planted in 1993 with a range of culinary and medicinal plants including camphor, camomile, lavenders, mints, soapwort, thyme, woodruff and rosemary.

An information board sponsored by the Friends shows a plan of the garden and the wide range of herbs growing there. It is a pleasant spot to sit quietly and enjoy the aromas and shades of green provided by these traditional plants.

A gift from Canada, the bronze statue to General James Wolfe by the Canadian sculptor, Robert Tait McKenzie, commemorates General Wolfe’s victory over the French at Quebec in 1759. It was unveiled in 1930 by the Marquis de Montcalm, a direct descendent of the French commander, Montcalm, who, like Wolfe, died on the field of battle.

James Wolfe (1727-59) was born in Westerham, Kent, the eldest son of General Edward Wolfe. William Pitt the Elder, Earl of Chatham, gave Wolfe command of 9000 men to sail up the St Lawrence and try to dislodge the French from Quebec. Wolfe left from his parents’ home, Macartney House (now private apartments), on the western edge of the Park, in February 1759 and landed below Quebec in June to find Montcalm in an apparently impregnable position. Wolfe scaled a poorly guarded part of the cliffs to reach the Plains of Abraham and defeated the French after a short battle. He is buried in St Alfege’s Church, Greenwich.

The statue is at the highest point in the Park and is Grade II listed. 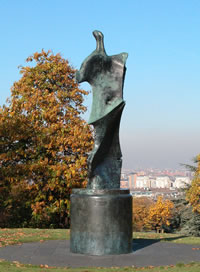 “Knife Edge” is a Henry Moore (1898-1986) masterpiece. One of an edition of six cast in Berlin in 1976, 3.6 metres (12 ft) high, it was installed in 1979 on the high ground past the Anglo-Saxon tumuli, in a position chosen for it by the sculptor. Henry Moore taught sculpture in London from 1924 to 1939. He travelled widely in Europe and the USA and was an official war artist from 1940-42, producing his famous drawings of scenes from air-raid shelters and the London Underground. His semi-abstract style drew on nature and natural forms, expressed in three dimensions and often on a large scale. Knife Edge in Greenwich Park was set off to good advantage by its position near the edge of the escarpment.

The sculpture is the property of the Henry Moore Foundation.

This plaque, put up by the Cornish Association in 1997 on the wall outside the Blackheath Gates, commemorates the 500th anniversary of the ‘Cornish Rebellion’ in 1497. An army of Cornishmen, led by blacksmith Michael Joseph and lawyer Thomas Flamank, marched to London to present a petition to Henry VII to protest at being taxed for the King’s Scottish wars. Flamank argued that money should come from the northern barons, not from direct taxation of the common people from far away.

However, the Cornishmen found themselves facing a force of 8-10,000 near Guildford. They headed for Kent which had a reputation for fighting for freedom but were not made welcome and returned to Blackheath, where some 6000 of them pitched camp on the afternoon of 16 June. The Royal army launched an unexpected attack on the morning of the 17th. Many Cornishmen were killed and are buried on the Heath, perhaps at Whitefield’s Mount, to the west of Goffers Road on the Heath. Flamank and Joseph were captured and hanged at Tyburn

The sundial with the three metre (9ft) gnomon by the Boating Pond is by Christopher Daniel, who also created the Dolphin Sundial at the National Maritime Museum. Given by an anonymous donor it was installed in 2000.