This important collection of mainly late 17th and early 18th century buildings is on the site of the Tudor royal palace. It was demolished, apart from an undercroft under the Queen Anne Building, for Charles II's new palace, of which only the block by John Webb (The King's Building), begun in 1664, was built.

In the 1690s, Queen Mary, daughter of James II and wife of William of Orange, decided to create the Royal Hospital for Seamen with Sir Christopher Wren as master planner. He included the Webb building and the Queen's House in his design. Both Sir John Vanbrugh and Nicholas Hawksmoor were involved in the development of the site.

The Royal Hospital for Seamen existed from 1705 to 1869. It was replaced by the Royal Naval College for the education of officers from 1873 to 2001. Much of the Old Royal Naval College site is now leased by the Greenwich Foundation to the University of Greenwich and to Trinity Laban Conservatoire of Music and Dance. The chapel (1747) and the Painted Hall with its James Thornhill ceilings (1712 and 1718) are open to the public. 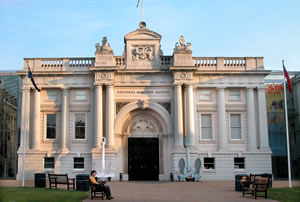 Set in Greenwich Park, the museum houses an internationally important collection of historical artefacts, displays and exhibitions telling the story of Britain at sea. The main buildings take in the wings either side of The Queen's House, added between 1807 and 1816 to enlarge the school for the children of 'pensioners' from the Royal Hospital. A gymnasium (now the Neptune Hall) was added around 1874. The school left in 1933 and the NMM opened in 1937.

The Queen's House, designed by the architect and polymath, Inigo Jones, for Anne of Denmark, wife of James I, is now the art gallery for the NMM.

The Royal Observatory at the top of the escarpment in Greenwich Park is also part of the NMM. Flamsteed House, designed by Sir Christopher Wren in 1675-6, on the site of Duke Humphrey's 15th century hunting tower, houses an important collection of historic astronomical instruments. The other buildings on the site house a planetarium, telescopes and interpretation galleries, providing a not to be missed visitor experience. 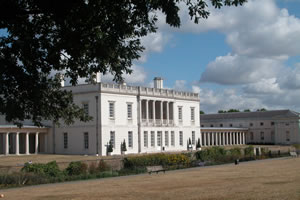 An Inigo Jones masterpiece, the Queen's House was the first building in England in the Palladian style, marking the transition from Elizabethan flamboyance to the purity of the classical form. It was commissioned in 1616 by Anne of Denmark, wife of James I, as her home in Greenwich Park.

James 1 had given his queen Greenwich Palace and the Park. When she died in 1619, he lost interest in the project and presented Greenwich to the Prince of Wales, later Charles I. Inigo Jones was involved with the Queen's House again from 1630 to 1635 when Charles commissioned him to complete the building for his young French wife, Henrietta Maria.

After various uses over the years, the Queen's House is now the art gallery for the National Maritime Museum and often houses special exhibitions 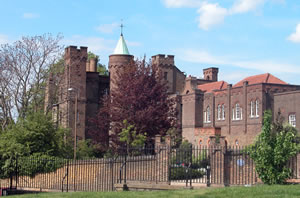 Vanbrugh Castle with its fairy-tale towers and turrets, lies just outside the park on Maze Hill. It was designed in 1719 by architect and playwright Sir John Vanbrugh (1664-1726) as his own residence and is the only survivor of half a dozen houses built on what is now known as Vanbrugh Fields. Vanbrugh Castle became a school in the early 19th century, from 1921 to 1974 an orphanage, and later a school for the sons of Royal Air Force officers. Sold to the Blackheath Preservation Trust in 1974 it is now four private houses.

Sir John Vanbrugh followed Sir Christopher Wren as Surveyor to the Royal Hospital for Seamen (now the Old Royal Naval College) in 1716, working to realise the architectural designs of the greatest architects of the age, Wren and Hawksmoor.

The fine pedimented moulded brick gateway into the Park opposite Vanbrugh Castle, Maze Hill Gate, dates back to around 1700. It was moved a little to the south and rebuilt in 1905. 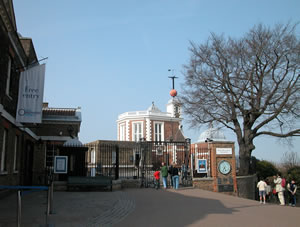 Flamsteed House was designed by Sir Christopher Wren in 1675-6 as an observatory for scientific study of the stars to help sailors identify their position at sea.

To save money, Flamsteed House was built on the foundations of the ruins of Duke Humphrey’s 15th century watch tower. Unfortunately for first Astronomer Royal, John Flamsteed (1646-1719), the base of the tower is not oriented on the true north-south axis but is some 13.5º out. He made most of his astronomical observations from instruments fixed to the wall in the courtyard and properly aligned with the meridian. The Altazimuth Pavilion and the South Building were added to the site between 1772 and 1897 and now house an important collection of historical astronomical instruments and a planetarium. The red ball on top drops at noon GMT each day. Part of the National Maritime Museum 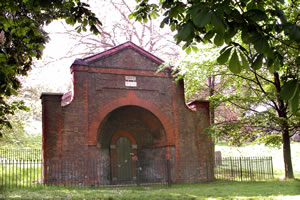 This dark red brick building dates back to 1710-11. It was one of many conduit heads built under the direction of architect Nicholas Hawksmoor, then deputy surveyor for the Royal Naval Hospital. Inside is a room 24.3m (80ft) in diameter. Water was piped from here to the Hospital from a large cistern into which all the conduits on the west side of the Park drained. Part of Hawksmoor’s job when deputy surveyor for the Hospital was to survey the conduits and to enlarge and vault them for maintenance.

The conduit head above the Children’s Playground dates from around 1708 and marks the entrance to another of the old water tunnels. Brick built conduits were used from at least the 13th century to bring water from the local springs to the former Greenwich Palace and to houses on the river front. East Lane Conduit House, on the north-east edge of the park near the Boating Pond, was originally one of the water storage units for the Tudor Palace and dates back to around 1515. 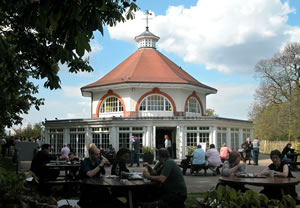 The Pavilion Cafe was designed by Sir Henry Tanner as a two-story octagonal building in the rustic style and built in 1906-7. It is topped by a dovecot with a weather vane showing Nelson looking through his telescope. Originally the cafe had an open veranda running round at ground floor level which was enclosed around 1967. The balustrade that ran round above the veranda has also been removed.

Work in 2003 has taken out the central core of the second floor, bringing much more light and space into the café. The gardens on the north side have also been brought into use.

The café is open all year round from 9am to 6pm or closure of the Park in winter for quality food and drinks ranging from British breakfasts to lunch, afternoon tea and family Sunday lunch. 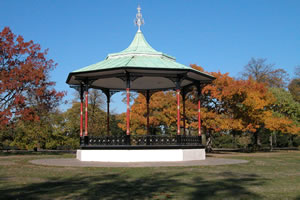 Cast by the Coalbrookdale Company, the Bandstand on the south side of Great Cross Avenue was erected in 1891 and is now Grade II listed. An attractive open octagon with ornamental cast iron decorations under an iron-framed roof, the bandstand is painted in traditional red and black.

The bandstand, the Pavilion Tea House, the Metropolitan Drinking Fountain, the sandpit that was the forerunner of the Children’s Playground, and toilet facilities were all features added at a time when the character of the Park was being changed to make it more urban and attractive to visitors.

The Bandstand is used for open air concerts on Sunday afternoons. 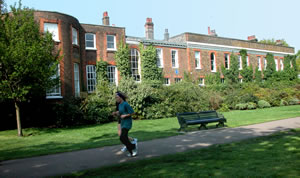 An attractive 18th century house on the western edge of the Park, Macartney House was home to the parents of General James Wolfe (1727-1759). He was educated in Greenwich and it was from here that he left for Canada and the battle for Quebec in 1759 in which he was killed. His body was brought back and lay in the house until his burial at St Alfege Church, Greenwich.

Macartney House comprises two 17th century houses which had been combined into a single dwelling by 1717. The house was extended by architect Sir John Soane (1753-1837) for George Fulke, Baron Lyttleton, who was descended from the Macartneys of Auchinleck. The property was divided into privately owned flats in 1926-27.

The Ranger's House and Rose Garden

A fine 18th century house on the western edge of the park, Ranger’s House was built in 1699. It passed into the ownership of the 4th Earl of Chesterfield in 1748, a noted statesman, writer and gardener and was renamed Chesterfield House.

When the neighbouring Montague House, former home of Ranger Princess Caroline of Brunswick (1768-1821), estranged wife of George IV, was demolished, it became in 1816 the residence for the holders of the Royal office of the Ranger of Greenwich Park. The last ranger, Viscount Wolseley (1833-1913) departed in 1896, leaving the house empty. Its 6.25ha (15 acre) garden created for Montague House by Princess Caroline, had already been returned to the Park.

Since 1986 the Ranger's House has been in the care of English Heritage and is now home to the Wernher Collection which focuses on early Renaissance Italian art and decorative arts (Tel: 020 7222 1234 Web site: www.english-heritage.org.uk) 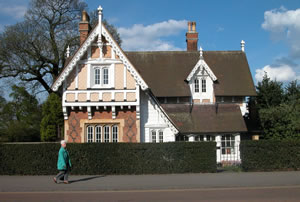 Built in 1851-2 for the Keeper of the Park to designs by architect John Phipps, it replaced the 17th century Keeper’s Lodge and orchard in the middle of the park near the Queen Elizabeth Oak. Described as ‘a notably early example of domestic revival architecture’, Phipps made good use of exposed timber to give it an attractive ‘Tudor’ feeling.

The Park’s best-known Keeper, Mr A D Webster, had a bathroom and additional bedroom put on at the back in 1899 but the lodge is otherwise little altered since it was built. His book 'Greenwich Park: its history and associations' published in 1902 is a mine of information about the Park 100 years ago. Secondhand copies can still be found. 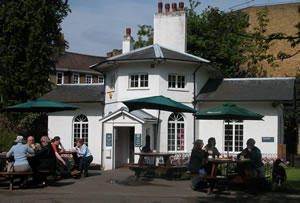 St Mary’s Lodge is Grade II listed and was built in 1807-8 for the park under-keeper to designs by John Nash. Princess Caroline, estranged wife of the Prince of Wales, later George IV, and Ranger of Greenwich Park, was instrumental in having the lodge built. It replaced an older building.

The lodge is an early example of Nash’s work (though the porch is a modern addition). Described as ‘a more than usually Italianate version of the Picturesque park lodge’ it was intended as the focal point of the view down what was then known as Snow Hill Walk, now The Avenue. The re-alignment of The Avenue on St Mary’s Gate, the route into the Park for cars entering and leaving at the north end, has changed the original concept. The lodge and gate are named after St Mary’s, a chapel of ease for St Alfege’s Church, Greenwich, demolished in 1936.